Greater Western New York a State? Why Not? – Exploring why, Unlike Vermont, America’s First Frontier Failed to Gain Independence from New York Colony 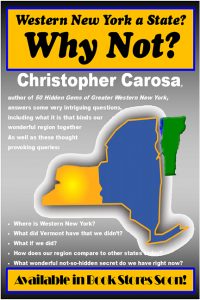 On a late Winter morning in 1775, William French woke up for the last time. The lively 22 year-old lived in the Town of Bennington, a municipality only five years older than the young adult. Self-named by Benning Wentworth, Governor of New Hampshire, the small hamlet lie on the west side of the Connecticut River, nestled in the broad curve of the oxbowing waterway in the fertile eastern valley beneath the Green Mountains. French walked that afternoon of March 13th along King’s Highway until he reached the farm house of Capt. Axariah Wright, an eccentric old patriot. There he met Daniel Houghton and nearly 100 other men. They were there to tackle a pressing problem.

50 Hidden Gems of Greater Western New York – A handbook for those too proud to believe “wide right” and “no goal” define us. Click here to see the book’s trailer and a sneak preview.

Would you like to benefit from reading Chris Carosa’s 50 Hidden Gems of Greater Western New York anytime you want?